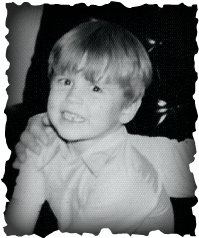 From an early age in Allentown, Pennsylvania, my vivid imagination became quite obvious as I would create spectacular worlds with the toys around me, giving them each their own special stories. The pattern of an oriental rug in the living room became a large island where my Fisher-Price Little People and Hasbro Weebles would live. With playsets including airports from both companies, a castle, western ranch, marina, and even a treasure island, I  would lose myself  in the adventures I created. There were times I was restricted from playing with these toys, so my drawing began.

The first drawings I created could usually be found on my sister's polka-dotted bed sheets or within the blank pages and margins of any book within my reach. These drawings were mostly of Little People, Weebles and Raggedy Ann and Andy. To say that my imagination kept my parents busy would have been a massive understatement.

Then, I was torn away from his grandparents, uncles, aunts and cousins when my father decided to move the family to Richmond, Virginia. Too young to know what this would mean, I eagerly anticipated the new adventure.

As a child in Elementary School, I was enthralled during any kind of storytelling during class. While other children found this as an excuse to nap, I stayed fully awake and was enthralled about the stories being told to me. As a young fan of "The Brady Bunch",  my artistic talent steered me towards architecture. I would 'borrow' graph paper from my brother and sister to create floor plans of grand homes. As I rummaged for spare graph paper, I stumbled across the novels of my sister, who was five years older, and would read many that caught my  eye. Even though I was still at the age of where "Scooby-Doo, Where Are You?" and Schoolhouse Rock were always watched religiously each and ever Saturday morning, it was here that I was introduced to such novels as "The Bachman Books" and "The Eyes of the Dragon" by Stephen King,  "The Talisman", also by King and fellow writer, Peter Straub, and "Elfquest: Journey to Sorrow's End" by Wendy and Richard Pini.

During this time, I found a friend that shared the same love for the 70's action figures "The Adventure People". We would spend countless hours together conjuring stories and adventures with the playsets and figures we each had. Even though it would seem to the average onlooker that I was just "being a kid", I was beginning to find my niche for understanding the story-telling process.
Powered by