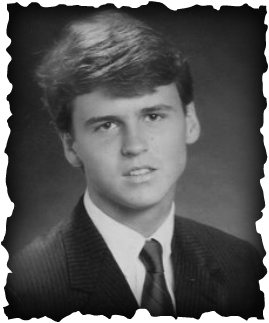 From the divorce of my parents and relocation to another state with my father, I was now an only child that had none of my usual friends for support.

I was beginning to enter the experience that is "high school."

Without my old friends to be there for my, I began to withdraw into myself. The one thing that was different is that I now lived in a quiet college town of Edinboro, Pennsylvania and lived close to the campus. I tried to resume my old routine and made some friends, but very little with the same imagination as the ones that I left behind. I decided to become more involved with Dungeons & Dragons as a way to feel close to those so far away and would buy its books and dungeon modules whenever my father took me to the mall in nearby Erie. I did this not so much to play the games, but to read the stories within them. I discovered the campus store and found graph paper and colored pencils. Now, I used the graph paper to create elaborate dungeons for my own enjoyment. I began collecting the metal figurines popular with Dungeons & Dragons during that time and would hold myself in the basement as I delicately painted them and used my father's train platform

Letters back and forth from my old friends in Virginia made me decide to write the story that I began as a home movie before I moved away. Noting that "The Eyes of the Dragon" and "Journey to Sorrow's End", as well as the many "Dungeon and Dragons: Pick-A-Path to Adventure" and dungeon module books I had, contained illustrations within them, I decided to do the same. It was not until one fateful Saturday as I searched through the Dungeon & Dragons section at a local mall bookstore that my true passion for illustration would be born.

It was that day I saw his first graphic novel.

The title "Elfquest" I recognized from the novel I had 'acquired' many years before. As I flipped through the pages of the graphic novel version, I was amazed at what I saw. While my father would call it a "glorified comic book", the artwork of this large book left me in awe. Having read the novelized version first, I was excited to see these characters 'face to face", as it were. The way that the words and pictures told such a compelling story had me hooked. I spent all of my allowance money on these novels and not only read them, but studied them.

When I realized that these were actually compilations of a current independent comic, I asked my father to take me to the nearest city with a comic book store and bought up the back issues. I was amazed that they were not only quite large but in black and white. Once I was up to date with the series, I would plead to my father every four months to take me into Erie to buy the next installment of the comic. I would try to emulate the same style as the artist, creating copies of her work and then I began to create characters of my own. It was at this time I decided to revise my story idea and the beginnings of "The Vensysian Chronicles"  was born.

Then my father moved them away again. This time, we headed south to the Pittsburgh area of the state and I was enrolled into a high school that not only had a wonderful art program, but a performing arts department. Here, I made some excellent friends and my creativity was allowed to soar. I was "the" designer of all the play program covers and many of the posters, too. I learned about plots and character backgrounds and my story began to take on a more solid form. It was also at this time that a friend handed me Dragonquest from the Dragonriders of Pern series of Anne McCaffery and studied her literary style and how she could create images with words.

I had so many outlets and resources to help me create something of my own.

I had created one "chapter" of my story and continued on a second one throughout my high school years. Circumstances had me leave my father and return to Virginia with the rest of my family. Once out of high school, I started working on different aspects of the story and that I needed it to become more detailed, so I began to go back to the original idea of writing the story as a manuscript first.
Powered by